From Chapter 2 of His Dark Materials, “The Idea of North,” Golden Compass/Northern Lights: Lord Asriel began:

“As some of you know, I set out for the North twelve months ago on a diplomatic mission to the King of Lapland. At least, that’s what I pretended to be doing. In fact my real aim was to go further north, still, right up on to the ice, to try and discover what has happened to the Grumman expedition” and to investigate “phenomenon only seen in the lands of the North.”

Lapland has become a largely derogatory to refer to the land of the Sami, the indigenous people of the far North extending across Scandinavia and into Russia, boundaries largely irrelevant to the semi nomadic reindeer herders. Their problem isn’t within themselves, but with colonists from the South, seeking their land, lumber, and resources, and creating mayhem in the usual way — family separation: sending children to government schools or factories, fostering them with non-Sami families, and forbidding the use of language. Slow genocide.

Was there a King of Lapland in Lyra’s world? Perhaps; the scholars do not doubt Asriel’s claim. But more than a standing army, they seemed to fear the witch clans and further north, the armed bears. North and north are used throughout the book. North is the destination; north is the way there.

On the Sámi people of today, I recommend:

Documentary: The Only Image of My Father.(https://www.amazon.com/Only-Image-My-Father/dp/B07H5P9MXY/ref=cm_cr_arp_d_product_top?ie=UTF80. May be found on Amazon Prime. Fifty years on, the pain of family separation endures. Also, see these websites:

Sami camp at lake Luossajärvi near Kiruna in Lapland. People, dogs and huts.

Sami family in Lapland, with a sledge, reindeer and a dog. 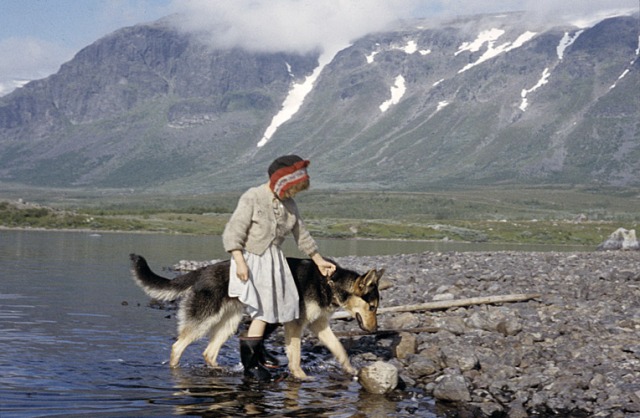 @Laurie Frost, 2019. all rights reserved. Photos are in public domain or Fair Use.