The night before they depart for London, Mrs. Coulter tells Lyra, “Now we’re going to leave very early in the morning bu the dawn zeppelin” (NL 72).

So I thought, we need some zeppelin images, for who can have enough of these? I turned to my favorite site for images that have public domain status, the Library of Congress’s Photographic division. There are dozens more you can search with keywords, zeppelin, airship. If you want to look at these in more details, I have included LoC call numbers. There are also some intriguing images in the Flick’r Commons, including some from Bergen, Norway. The “Graf  Zeppelin” as it appeared in its last trial flight, which included a visit to England. 1928. Zeppelin Passenger ship from 1920-15 appears to have an inside and outdoor passenger area. The outside basket in other documents refers to the “lifeboat.” Library of Congress, ggbain 09494 //hdl.loc.gov/loc.pnp/ggbain.09494

Perhaps this onelike the mooring mast at Bolvangar is. Photo from the early 1920s shows shows a British rigid airship R33 tied to its mooring mast. (ggbain 32943 //hdl.loc.gov/loc.pnp/ggbain.32943) i’m very curious about the docking of this Graf Zeppelin in Norway, found on Flick’r Commons. I suppose it is a space-saving technique for unoccupied airships, which must  land on the ground, in spite of mooring masts, and at a horizontal position. 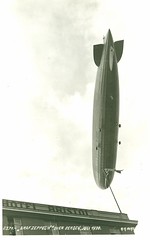